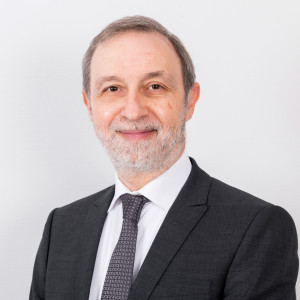 Jesús Serrano Martínez is an Aeronautical Engineer from the Polytechnic University of Madrid, and he completed an Executive Management Program at the IESE Business School. He joined GMV in 1986, and since January 2009 he has held the post of GMV General Manager.

Mr. Serrano’s career has been linked to GMV practically since it was established. He began working in Germany at the European Space Agency, and then he joined GMV in 1986 as an engineer specializing in flight dynamics, continuing on to hold positions of increasing responsibility: flight dynamics and avionics division manager (1989-1997), space systems and engineering business unit manager (1997-2000) and assistant space and defense manager (2000-2001).

From 2001, Mr. Serrano held the position of General Manager of GMV Aerospace and Defense S.A, the group’s subsidiary dedicated to the aerospace and defense sectors, acting as the top driving force behand GMV’s international expansion in the space sector in Europe and North America.

In January 2009, Jesús Serrano was appointed General Manager of GMV, an appointment that made him the business group's top executive, reporting directly to the group’s Board of Directors.