Automatic generation of database human-machine interface from a domain ontology, as part of the FAMOUS activities promoted by the ESA.

AuGeMMI stands for “automatic generation of database human-machine interface from a domain ontology”.
The development of satellite reference Databases (SRDBs) has always been a critical issue for European space projects. The purpose of SRDBs is to collection and preserve all know-how required for pre-launch testing of the spacecraft and its components during AIT and operating the spacecraft after launch.
There are two challenges for this type of system:

The solution proposed by ESA to solve those issues is to develop the means to fulfill stakeholders’ needs (focusing on the WHAT – semantics – rather than on the HOW) with a conceptual model, and automate the production of the SRDBs based on that model.

The FAMOUS methodology established by the Agency in the context of the TRP "Fact-Based Modeling Unifying System" is a formal approach based on notations such as FBM and ORM for information modeling to completely fulfill all stakeholders’ needs and produce a conceptual model that can be verified and validated by each stakeholder prior to any database software development.

The AuGeMMI activity has established how the knowledge captured by the FAMOUS methodology can be transformed into the knowledge required to automate the production of any SRDB software. 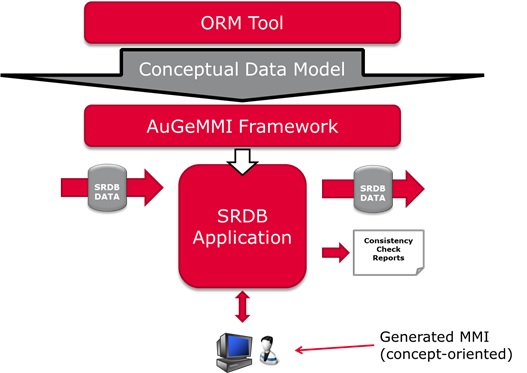 As proof of concept, AuGeMMI has produced two prototypes for two different approaches:

The two prototypes, stemming from the same conceptual model, demonstrate the possibility of automatically producing semantically rich MMIs that are closer to the stakeholder's view of the system than other approaches that, for example, produce an MMI from an implementation model (e.g. Oracle tables).

Although these two solutions are technically different (one relational and the other object-oriented), they are semantically equivalent from a data storage viewpoint. Data can be exchanged between the two solutions without any semantic loss, which demonstrates semantic interoperability.

GMV: (ES, J. Pacios) acts as prime provider for the consortium, responsible for developing the AuGeMMI framework for Oracle.

PNA Group :(NL, I. Lemmens and J. P. Koster) acts as subcontractor responsible for FBM support and development of the domain ontology.

ORM Solutions: has provided support for the NORMA software and the JFE framework.